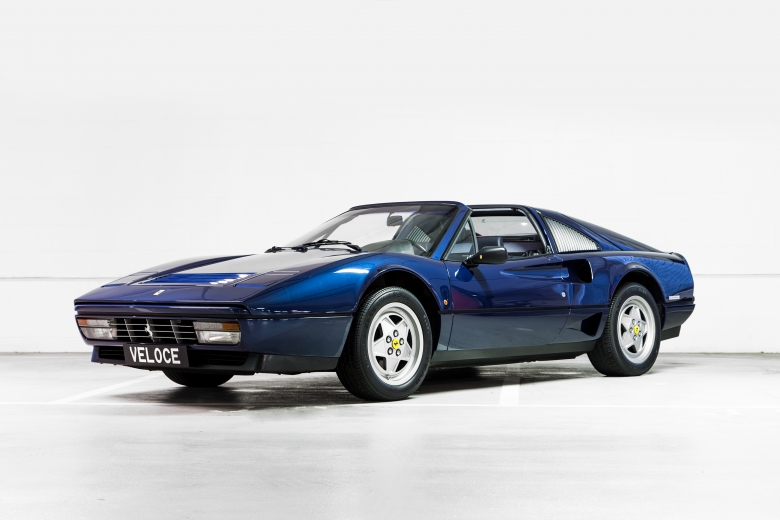 The Ferrari GTS and GTB Turbo were launched in 1986 and were the final developments of the transverse V8 engine 2-seater Ferrari series.

Essentially the GTS Turbo was, as the name implies, a turbocharged variant of the 328 GTS, but fitted with a 2 litre engine due to an Italian tax law that penalized engines larger than 2 litres.

Like the 328 GTS, the GTS Turbo model presented a softening of the wedge profile of its predecessor, the 208 GTS Turbo, with a redesigned nose that had a more rounded profile, complemented by similar treatment to the tail valance panel.

The body styling and cabin were the same as the 328 series and included all the latest aerodynamic and ergonomic improvements added by Pininfarina.

It is interesting to note that this model offered performance comparable to the 328, which was powered by the naturally aspirated version of the 3.2-litre. 0-100 km/h took just 6.3 seconds and the top speed was 253 km/h.

From 1986 to 1989, a total of 828 GTS Turbos were manufactured by Ferrari. With the company once again turning its attention to turbocharged engines, these GTB and GTS Turbos can be seen as the forefathers of this most recent revolution.

Having been made in such low numbers, they are eminently collectable cars today and would be appropriate additions to any collection.

Originally the car was Finished in Azzurro Blue with matching leather interior, it was factory ordered by prince Jefri of Brunei royal family in this lovely Blue Le Mans and the car had a factory color change.

It remained in his large private collection until it was discovered sold in the U.K. After many years of professional storage and very limited use, the odometer is reading a mere 3,671 kilometers.

The overall condition of this vehicle is stunning and commensurate with such a low mileage example. The panel fit and shut lines are beautifully consistent from every angle.

The paintwork retains a superb shine and the interior is one of the very best we have seen. The engine bay looks very original and is in lovely condition. The car runs and drives well and has been recently serviced by Ferrari.

A top collectors car in superb condition and extremely rare to find in the open market today Supplied with its original service book and UK registered.

Interested about our Ferrari GTS Turbo? use the form below and we will get in touch