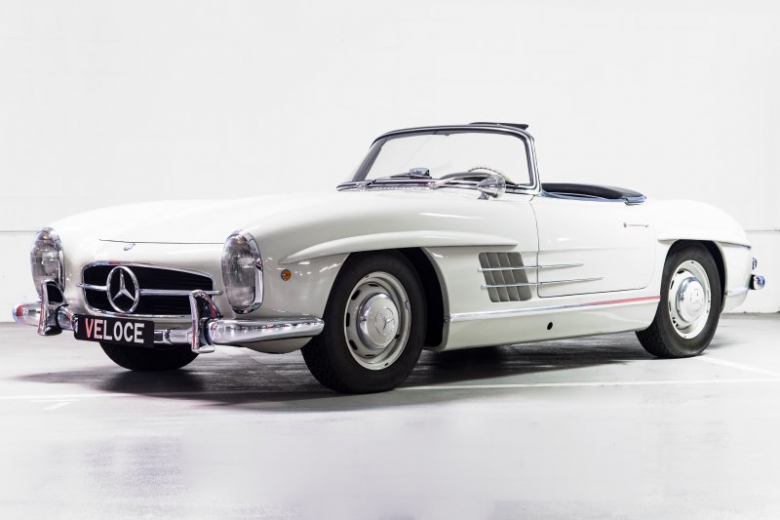 To many, the Mercedes-Benz 300 SL is an automobile that needs no introduction.

American Mercedes-Benz importer Max Hoffman was convinced that a road-legal version of the successful W194 racer would be profitable in the United States.

He knew that his clients would love the performance and styling of such a vehicle, so he lobbied the top brass at Mercedes-Benz to develop the car. Luckily for him, and us, Hoffman’s wish was granted.

The automobile that followed was nothing short of extraordinary.

The 300 SL, sporting a chassis directly developed from lessons learned in campaigning the W194, was the first production automobile that used fuel injection as opposed to carburation, which was a technological advancement that allowed it to become the fastest street-legal car of its day.

When it premiered at the 1954 New York Auto Show, the public fell in love with the car not only for its performance but also for its breathtaking good looks and proportions.

The design of the 300 SL would even catch the eye of Andy Warhol in 1986, when it was featured in a painting entitled Cars, which was commissioned by German art dealer Hans Meyer.

Max Hoffman wanted an open version from the very beginning, and after the success of the coupe, a convertible version of the 300 SL was released, going on to attract even more buyers towards Mercedes-Benz’s most innovative sports car.

Since the 300 SL would lose its top, engineers reinforced and modified the space-frame chassis to fit conventionally hinged doors, which simultaneously allowed for greater ease of entry by lowering the height of the chassis on the door line, albeit a small forfeiture of the original model’s character.

Designers used this opportunity to make several slight changes to the 300 SL’s body, and many installed new headlights and a smaller grille opening and fitted dual chrome strips on the side sills, to give the car a more streamlined and glamorous look.

The roadster was introduced in 1957, and it offered the performance and style that the coupe was known for but with a dash of practicality and the thrill of open-air driving, making for a motoring experience that was second to none. In order to keep performance on par with the coupe, all roadsters were offered with the more sporting NSL engine of the coupe as standard configuration.

This made the roadster capable of top speeds that ranged from 133 to 155 mph, depending on the final drive ratio specified.

Production on the roadster and the iconic W198 platform stopped in early 1963, with 1,858 examples being produced, making it even more popular than its gullwinged predecessor. Also like the coupe, the roadster was certainly the item to have for the jet-set in the late ’50s and early ’60s.

The 300 SL Roadsters were favored by celebrities for its style and racing drivers for its performance and brilliant engineering, and they often found homes with just about anyone who appreciated fine machinery and those who had the bank account to acquire it.

With a list price of $11,000 when new, the style and performance it provided certainly came at a price.

As with all great and historically important automobiles, it has retained that same persona to this day, and it remains amongst the world’s most desired cars.

The car offered here today is a late 1961 model with factory disc brakes and the unbrakable steel engine block that makes it the most desirable of them all.

This European 300SL Roadster is also very rare because it has never been resrtored. It had a partial paint job many years ago but since the car is just as original as it should be.

A very rare find indeed. Finished in white gray as it came out of the factory the car retains its original leather patina. It comes with full ownership history its books and toolkit, and luggage set.

One of the very few Unrestored well preserved 300SL Roadster Cars on the planet.

Interested about our Mercedes 300SL Roadster? use the form below and we will get in touch