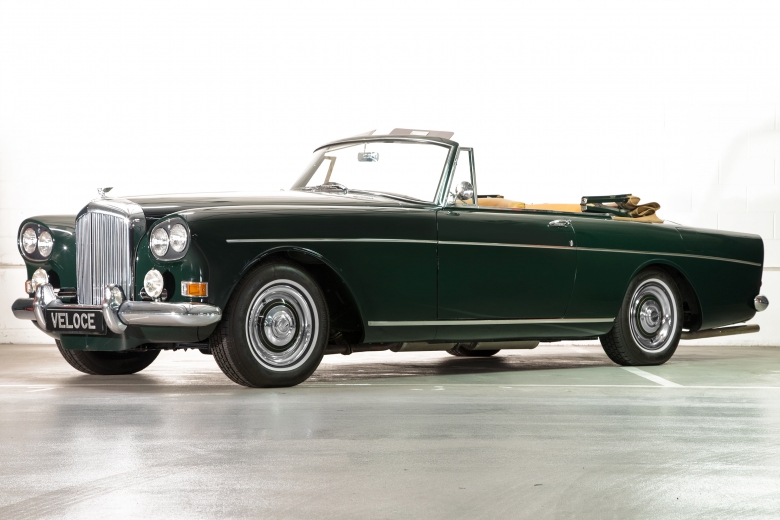 One of only 45 cars ever produced, this Bentley Continental S3 DHC 1965 is presented in stunning condition.

Finished in Dark Green, with a full beige leather interior and coordinating beige full electric hood, the overall aesthetic is one of classic elegance and opulence which is rarely seen today. Marrying its classic look with modern convenience this Bentley Continental S3 DHC also benefits from power steering, electric windows, and air conditioning.

In the 1980s the car was exported to the United States where it was well kept in a private collection for many years. In 2013, the Bentley Continental underwent a comprehensive nut and bolt restoration and was subsequently repatriated to the United Kingdom, where it was registered and has since remained.

Its rarity, exceptional condition and unique history make this Bentley a unique investment opportunity, and a definite boon to any serious collection of period cars.

To find out more or to book a test drive please contact the Veloce Classic & Sports Cars team.

In the aftermath of World War II, Bentley moved back into production of civilian cars, and the early 1950s saw the first Continental (R-Type) models produced.

During the 1950s and early '60s the Bentley Continental gained popularity for high-speed touring, with its lowered suspension and high powered engines making it an ideal candidate for motorists wishing to combine luxury and performance.

For more information on the history of the marque visit https://www.bentleymotors.com/en.html

Interested about our Bentley Continental S3 DHC 1965? use the form below and we will get in touch