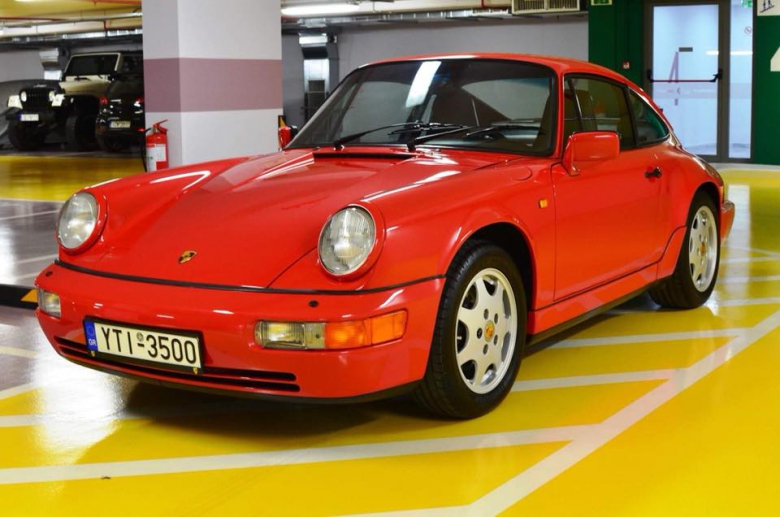 Representing a major step forward in the development of Porsche's perennial 911, the Carrera 4 and Carrera 2 ('Type 964' in factory parlance) had been launched in 1989, the former marking the first time that four-wheel drive had been seen on a series-production model.

Porsche had experimented with four-wheel drive on the 959 supercar, and many of the lessons learned from the latter influenced the design of the new Carreras' chassis and suspension.

Face-lifted but retaining that familiar shape, the newcomers had been given a more extensive work-over mechanically, 87% of parts being claimed as entirely new.

The pair shared the same 3.6-litre, 250bhp, air-cooled flat-six engine, while power-assisted steering (another 911 'first'), anti-lock brakes and a five-speed manual transmission were standard on both, with the Tiptronic auto 'box a Carrera 2-only option.

Its new engine enabled the 964 to out-perform the old '3.2' yet still met the latest emissions regulations, top speed increasing to 162mph with 60mph attainable in 5.4 seconds.

Our car offered here today was delivered new in Italy in 1991. During the years the car had two owners and full service history up until 2007. It was that year when the car was exported to Greece.

There the car stayed with a single owner who performed a full bare metal respray on the car and replaced all the rubbers. The car was kept as part of a collection until it was purchased from us in November 2017.

Today it comes with Greek registration, a recent service, brand new tyres fully functional A/C and a shiny new paint job. The interior is kept in lovely condition throughout with the original black leather seats remaining in good shape.

This is a very reasonably priced car at 56.000euros Please contact us for more information and images on this lovely car.

Interested about our Porsche 911 964 Carrera 4 LHD? use the form below and we will get in touch