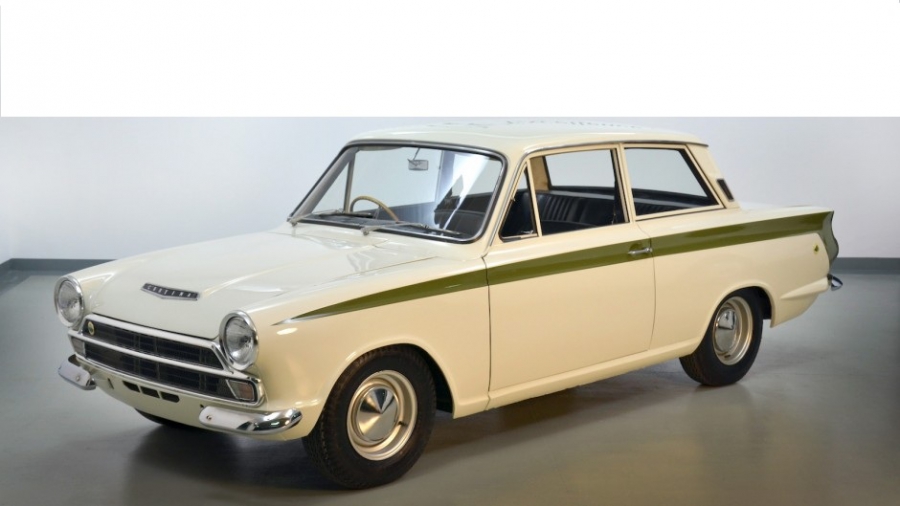 The Lotus Cortina MK1 1965 Officially known as "The Cortina Lotus", the car was initially marketed by Ford as "The Consul Cortina Developed by Lotus". It was the result of a collaboration between Walter Hayes at Ford and Lotus boss Colin Chapman, who designed its engine. The Lotus Cortina was powered by a 1.6 litre , four cylinder, twin camshaft Lotus engine coupled to a four speed close ratio Lotus Elan gearbox. It produced 105 BHP and achieved 105 MPH with 0-60 in 10 seconds. Known also as "The First Fast Ford", the Lotus Cortina was developed and assembled by Lotus. The car succeeded in boosting Ford's performance image as it was a success on the race track and rally courses. To enhance performance, the bodywork featured a light-weight alloy bonnet, alloy boot, and alloy front door panels. The Lotus Cortina was "The Car" for Ford enthusiasts who desired more power.
VELOCE CLASSIC is delighted to offer this RHD Lotus Cortina MK1 for sale. First registered on June 17 1965, it's had two previous owners - the last owner since 1995. It is one of just 1,118 1965 MK1's produced. This is the sought-after 'Aeroflow' model with 'A-Bracket' rear suspension. Finished in Ermine White with Lotus Green striping, the external bodywork is in immaculate condition. So too is the interior. This classic car has been well maintained throughout its history and has a very low recorded mileage. It had a full restoration in 1989 and a light restoration in 2009. The car's ultra light body (840kg) powered by its Lotus twin camshaft engine, affords (after more than 45 years) a most satisfying driving experience.

Interested about our Original Lotus Cortina? use the form below and we will get in touch