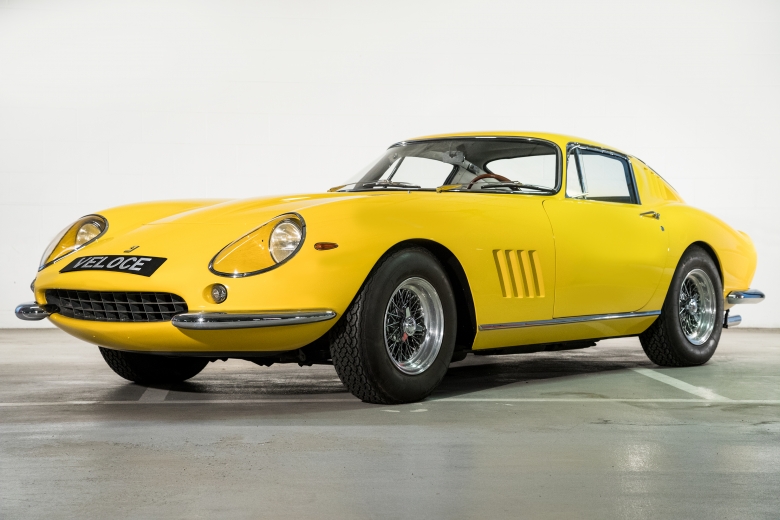 This gorgeous Ferrari 275 GTB/4 was sold new to Sig. Piero Barucci, Firenze, Italy from Ferrari in 1966.
This well-known car was at the time, ordered blue (20-A-183).
Piero Barucci is an eminent politician and economist in Italy, involved in a lot of charities, but also a well-known car enthusiast. In late 1966 Sig. Barucci had a road accident with its beloved Ferrari.
Following the advise of his friend, Count Benelli (of Benelli motorcycle), he return the car at the Ferrari Factory in Maranello.
By January 1967, the car was totally factory re-build and was confirmed by Ferrari as a complete new car.
As Sig. Barucci requested, the colour of the car has been changed to Giallo (yellow), keeping the black leather interior.
Even worldwide renowned Ferrari expert Matthew Urban indicate in his book on 275's that chassis 09421 was originally yellow.

Sig. Barucci did a deal in that same year to return the car to the factory in part exchange for a new aluminium bodied Ferrari 275GTB/4, Chassis No 10303.
The car was then sold by the Ferrari Factory to Luigi Chinetti in New-York, the Ferrari importer for the USA. We understand that the car was then sold to Mr Peter C. Connoy of Connecticut.

In 1987/8 the car was sold via Mr. Jerry Curtis, a well-known Ferrari specialist from New York, to Mr. J. S , UK.
He kept the car in the USA for some years, then imported it into the UK. During his ownership he started to restore the car.
The car was repainted in Silver before Mr. S ran out of time and funds. Then it was sold to Mr. T. H of London in 1998.
In 1999, Mr. H, sent the car to Moto Technique Ltd., well-known Ferrari restorers of West Molesley, UK for the restoration to be completed.
Before the restoration could start, the car was sold again to an Italian client.
The Italian client who purchased the car and started again on a complete restoration.

The coachwork was repainted to Giallo Yellow. The bodywork and paintwork restored by Carrosseria Nova Rinascente- Sig.Dino Cognolato -one of Italy's most renowned coach builders.
The interior re-trimmed in black leather, all mechanics rebuilt; In fact a total nut and bolt restoration.
The car was finished in 2003 and was driven on the Ferrari factory tour Tuscany 2004.

Interested about our Ferrari 275 GTB/4 1967? use the form below and we will get in touch