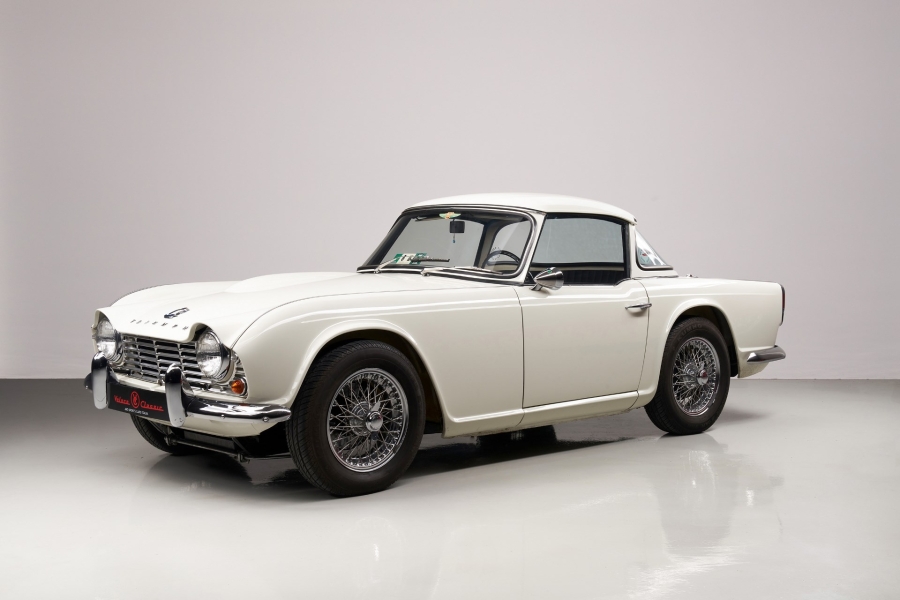 The Triumph TR4 was introduced in 1961 as a successor to the TR3.

While the new TR4 was based on the same drivetrain and chassis as its predecessor, the TR4 sported dashing new coachwork by Michelotti.
The TR4 shared the same basic chassis as the previous TR3, but benefited from a wider front and rear track as well as rack and pinion steering.
The transmission offered full synchromesh in all forward gears, and the optional Laycock de Normanville electrically operated Overdrive could be selected for 2nd and 3rd gear as well as 4th, effectively providing the TR4 with a seven-speed manual close ratio gearbox.
Engine output was also increased for the TR4, from 1,991cc to 2,138cc thanks to a larger bore.

A Concours D’ Elegance winner this Triumph TR4 was delivered new in the USA in 1964 and spent its life in Virginia.
During the late 2000 the car returned to London where it saw a nut and bolt restoration by JD Classics.
Later on in 2011 the car was sold to Greece to a private collector who won a Concours D’ Elegance award.
Finished in SPA White like the day it left the Trumph factory this TR4 is one of the best examples for sale in the European market today, with a rare original Surrey Hard Top, wired wheels, and a Laylock Overdrive gearbox.

A beautiful classic that attracts attention, a secure investment and for sure an undervalued classic.

Interested about our Triumph TR4 “Surrey Top”, Laycock Overdrive? use the form below and we will get in touch