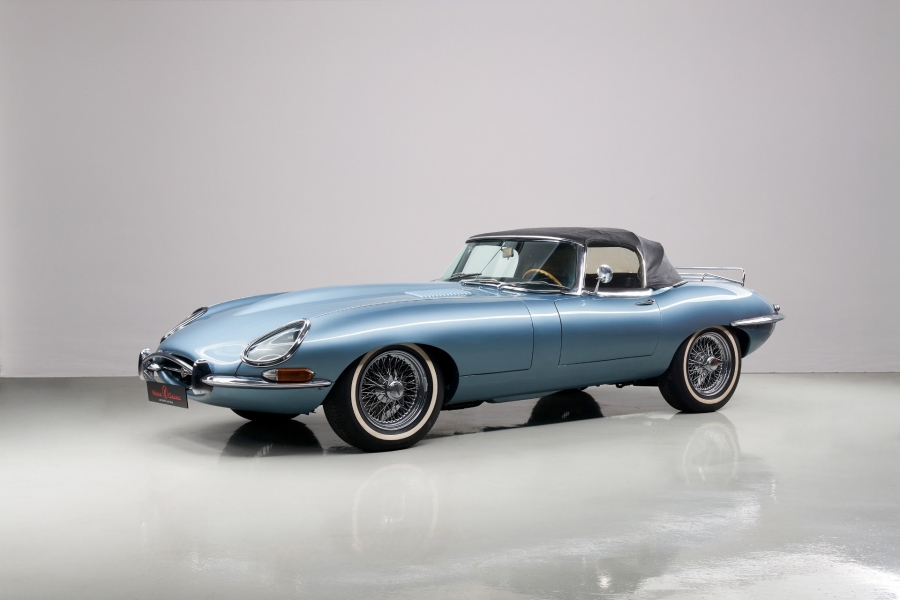 HISTORY:
The Jaguar E-Type’s inherent beauty is legendary, and it is one of a few cars to ever be exhibited at the Museum of Modern Art in New York.
Production of the car began in 1961, and it originally featured a 3.8-liter overhead-cam six-cylinder engine. Its styling, which was the work of Malcolm Sayer and had been overseen by company founder Sir William Lyons, evolved from Jaguar’s Le Mans–winning D-Type race cars. The E-Type’s construction was a multi-tube front end bolted to a steel body shell.
The long, low hood and front fenders were one assembly and hinged at the front for unobstructed engine access.

Built in 1967 and shipped new to Jaguar New York this gorgeous example was first sold to Yellow Springs, Ohio where sold to its first owner.
Not long after (just 5 years) the car was sold to its second owner and remained with him until 2007 where it was placed for sale on eBay motors as a complete and running example still finished in its original Opalescent Silver Blue colour and totally original leather interior.
The car was then sold in Europe where it has seen a nut and bolt restoration with body, matching numbers engine and matching gearbox being totally stripped and restored.

The car kept its original colour combination and its original leather interior which was preserved in all those years with a lovely patina.
Mechanically sound and with a solid original body, the car retains all its original panels apart from a door that has been replaced during the restoration.
In 2007 the car came to Europe with 62.000 original miles and has only covered not more than 3500 miles since with only one careful owner who cherished the car.

A lovey example of one of the most desirable late S1 4.2 E-types.
Take a chance to own one “the most beautiful car ever made” according to Enzo Ferrari which celebrates its 60 year debut this year.

Interested about our Jaguar E-Type Series 1 4.2 Roadster? use the form below and we will get in touch