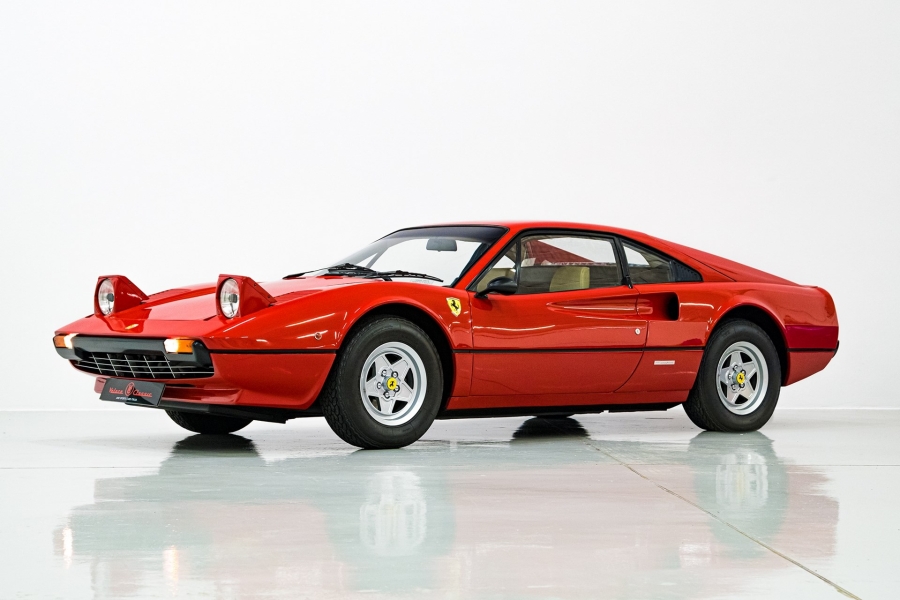 HISTORY:
Officially introduced at the Paris Salon in October 1975, the 308 GTB’s styling was created by Pininfarina.
The stunning two seat coachwork was all new, but incorporated all of the old magic by blending aspects of the Dino 206/246 with the later 365 GT4/BB.
Reminiscent of the Boxer was the dihedral groove at bumper level splitting top and bottom, the plunging nose and the sail panels reaching back to meet a shallower spoiler, while the conical side air intakes and recessed concave rear window were familiar from the Dino.
The 308 GTB employed a tubular steel chassis with independent coil spring/wishbone suspension front and rear, complimented by anti-roll bars, adjustable dampers and powerful disc brakes.
At its heart was a Formula One derived, all alloy, four camshaft 3.0 litre V8 engine, allied to a transversely mounted five-speed gearbox.
The very first 308 GTBs produced, until the end of 1976, were the fastest and best handling thanks to a fibreglass body that weighed substantially less than the steel coachwork which replaced it.

OUR CAR:
This example was destined new for the Australian market.
The car was sold to its first owner in January 1977 and remained in Australia till the late 90’s where it was imported to the UK.
During that time the car has been maintained by Maranello Ferrari.
In early 2000 the car went back to Australia and became part of a famous Ferrari collection.
In 2015 the car was sold back to the UK and purchased by a French investment banker from Landmark cars Co in London.
The car was maintained by GTO engineering at the time who gave the owner a full report of the car prior the purchase.
In 2017 the car was purchased due to the previous owners relocation by us and became part of our private collection.
It was maintained by Scuderia Scaglietti Ferrari specialist in London and HR Owen Ferrari with a recent big service that included belts.
This year the car was shipped to Italy in order to participate to the Ferrari Cavalcade tour but the event was canceled due to the COVID-19 outbrake.
During its time at our premises in Padova, Italy the car had a fresh service at Ferrari Michelotto.
This 308 Vetroressina is believed by specialists to be one of the purest and lowest mileage RHD examples in the world today.
A rare car, UK registered with (SYF230R) and ready for its new home.

Interested about our Ferrari 308 GTB Vetroressina? use the form below and we will get in touch

More in this category: « Ferrari F40