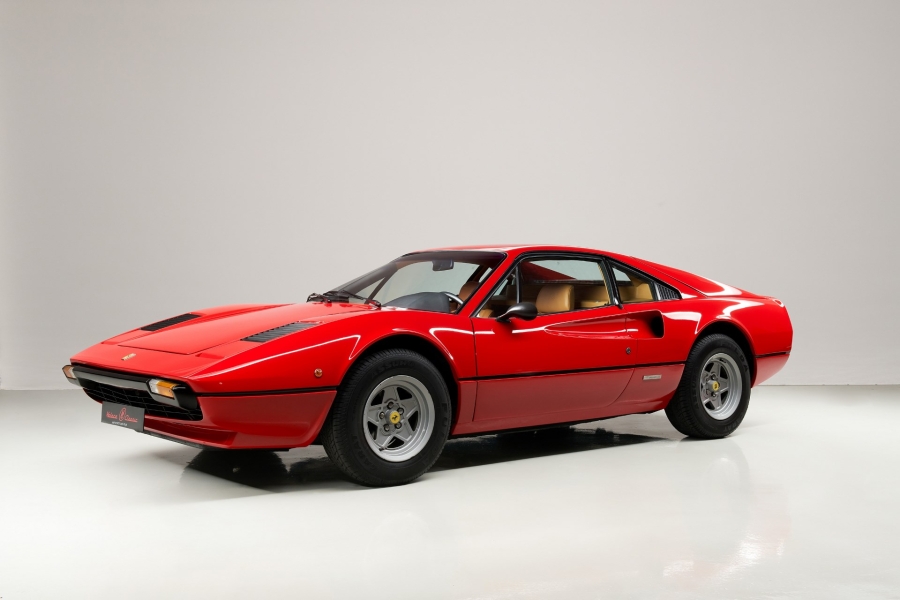 The evolution of the Ferrari Dino could be nothing less than a better mid engined supercar and Ferrari took matters quite seriously.
Introduced at the Paris Auto Salon in 1975, the contemporary styled 308 GTB marked a return to Pininfarina styling following the Bertone-designed 308 GT4.
Badged as a 'proper' Ferrari rather than a Dino, the 308 GTB had changed little mechanically apart from a reduction in both wheelbase and weight, retaining its predecessor's underpinnings and transversely mounted engine that now featured dry-sump lubrication.
In road tune this superbly engineered power unit produced 255bhp, an output good enough to propel the 308 GTB to a top speed of over 150mph.
Produced initially with fiberglass bodywork the Scaglietti-built 308 GTB used steel after April 1977.
Further developments included the introduction of an open-top GTS version with Targa-style removable roof, the adoption of Bosch K-Jetronic fuel injection and, finally, revised cylinder heads with four valves per cylinder on the Quattrovalvole (QV) model in 1982.
Both an exhilarating driver's car and a Ferrari purist's delight, the 308 and its many derivatives proved to be a huge commercial success for Maranello, with over 12,000 sold.
The most desirable cars today are the early Vetroressina’s and the still body Dry Sump cars.
The reason was the fact that as an official Ferrari dealer, Michelotto began modifying and race-preparing lightweight 308GTBs with dry sump in the late 1970s for Italian privateers and Pozzi (Ferrari France).
Ferrari had never envisaged the 308GTB with competition in mind but Michelotto nevertheless received authorisation from the factory as well as good deal of clandestine support.
Michelotto’s programme was facilitated by the fact that Ferrari had homologated a variety of performance-enhancing components in 1976, shortly after the 308GTB’s introduction.
As a result the purists are looking for those rare dry-sump cars today and this is the case of our car.

Built in 1977 this 308 GTB Dry Sump left the factory and delivered to its new owner by Autobecker official Ferrari dealer in Germany.
It remained there until 1980 where it was sold to its second owner in Spain where it lived a big part of its life.
As a result the car had no corrosion issues due to the dry Spanish climate.
The car returned to Germany and was later sold to its Greek latest owner who happens to be a Porsche specialist but a Ferrari enthusiast.
It remained with him for approximately 14 years where it was maintained and loved.
At approximately 100.000km and in 2019 the car had a full engine rebuilt and at the same year the car was stripped out completely for a bare metal respray to its original Rosso Dino Ferrari colour.
A brand new conoly leather interior was fitted to the car at the same year.
This is resulting a great combination of a well presented revised example of a matching numbers European steel body 308 GTB Dry Sump, completely accident free and ready for its new owner.
Priced correctly at 89.000 euros
and offered by Veloce Classic Italia SRLS

Interested about our Ferrari 308 GTB 1977 Steel Body? use the form below and we will get in touch